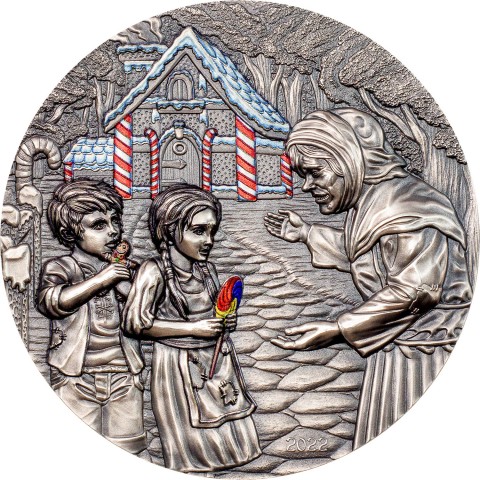 The ‘Hansel & Gretel’ coin is the third issue in the ‘Fairytales’ series. It is struck using the enhanced ultra high relief Smartminting©️ technology and brings the story to life. The coin has an antique finish, is partly colored and is struck on a 3 oz pure silver 50mm blank in the highest quality. It has a limited mintage of only 333 pcs worldwide and comes in a beautiful box with a Certificate of Authenticity. A perfect gift for the young collector. Get this third edition now to complete your collection.

The obverse side of the coin depicts the standard Coat of Arms with Queen Elizabeth II, surrounded by Fairy Tales elements, and the inscriptions: “FAIRY TALES” (the name of the series), “20 DOLLARS” (the face value), “ELIZABETH II” (the title of the Queen) and “COOK ISLANDS” (the issuing country).

Hansel and Gretel are characters in a fairy tale collected by the Brothers Grimm. The fairy tale was published in the 19th century in Grimm’s Fairy Tales. It has been a very popular fairy tale ever since, influencing multiple cultural phenomena.

The fairy tale depicts a brother, Hansel, traveling to an abandoned forest together with his sister Gretel. Where they find a house made of gingerbread, cake, and other kinds of candy. Inside they meet a witch, a cannibalistic witch. The witch intends to fatten the siblings by feeding them candy so she can consume and savour the children. However, after Gretel manages to outwit the witch, the siblings can escape with the witch’s treasure and return home. The end.