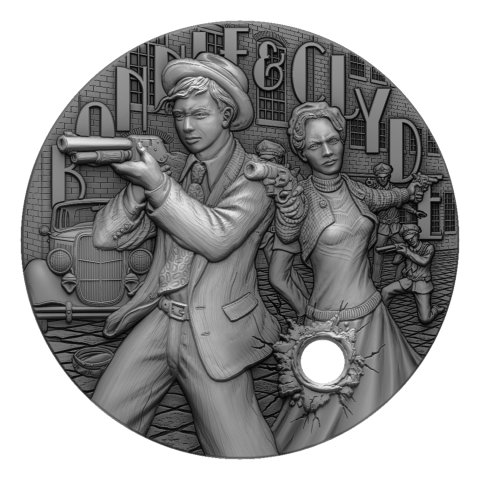 Bonnie and Clyde coin is the second one in the gangsters series which features the biggest
gangsters of all the times.
The 2oz high relief coin commemorates the most famous couple of American gangsters, Bonnie
Parker (1910-1934) and Clyde Barrow (1909-1934).
The couple and their gang was mostly known for bank robberies, however they also rob stores, gas
stations or funeral homes while travelling through America.
Policemen were permanently chasing them across America, they were very often under fire and had
to keep running and constantly change their location.
You can find a scene depicting one of the gunfight on the coin's obverse.
Bonnie is holding 2 revolvers in hands in two opposite directions, while Clyde holds a shotgun.
There are also 3 policeman in the background who hold them at gunpoint apart from the car they
were using during robberies. It makes the whole scene is looking quite dynamic.
After series of robberies and murders Bonnie and Clyde were finally ambushed and shot to death in
Bienville Parish, Louisiana.
The couple and their gang are believed to have murdered at least nine law enforcement officers and
four civilians.
There is a hole with jagged edges after a bullet hit In the bottom right corner of the coin. This is a
characteristic element of "The Gangsters" series, which will be present on each of the 4 coins.
The reverse of the coin remains the same for all coins in the series (apart from the year of issue that
changes) and shows an eight chambered revolver barrel with four 9mm caliber bullets. Each of the
bullets has been gilded with 24 karat gold.