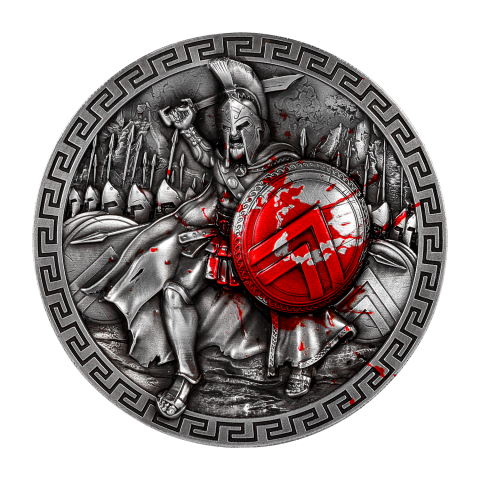 King Leonidas is very famous in Greek history as the leader of the Greek forces that were involved in the last stand at the Battle of Thermopylae. King Leonidas died in the battle along with 300 other Spartans. The Greeks were ultimately able to expel the Persians and the actions of Leonidas and his Spartans are credited for making the turning point in the war possible. This is one of the classic tales of a much stronger force being held off by a tiny force. A hero cult later developed around Leonidas because of the level of fame that he garnered after the events of Thermopylae. There have been numerous movies and shows made around the topic as well in modern times. The reverse side of this piece is concave and the back side is convex and this gives the art more definition and increases the send of action.

Sized at 60mm diameter, this 5 oz 999 Fine Silver collectible is struck concaved on the reverse in ultra-high relief, complemented with antiqued silver finishing that accentuates the lifelikeness of King Leonidas and his spartan army while the obverse features the shield of the spartan. The design is finished spectacularly with a splatter of blood red paint on both sides to emphasize the grueling battles that happened during those times. This is a limited edition of 111 pieces only. Each piece is packaged and delivered with a Certificate verifying its edition number and authenticity.