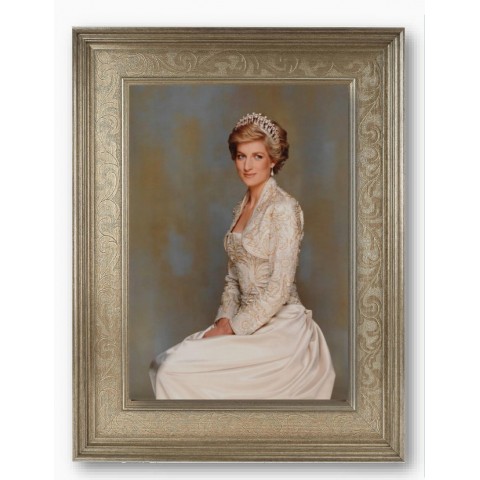 The event and the gown ...
President Mitterrand hosted a banquet at theÉlyséePalacefor the Prince and Princess of Wales during their November1988 trip to France, and the Princess picked a VictorEdelstein design for the occasion. The embroidery on thebodice and long-sleeved bolero jacket was both the star ofthe show and its specific connection to France: the floraldesign of simulated pearls and white bugle beads outlinedin silver and gold was hand embroidered byHurel, thefamed French couture embroidery house. The oysterduchesse satin dress also featured a skirt with a tuckedbustle effect at the back.The dress was said to have been one of Diana's favorites.It was also one of the most expensive pieces in her formalwardrobe, reportedly costing around £55,000 at the time.She wore it again for an event in 1989. Originally pairedwith diamond and pearl earrings she received as a weddinggift; she added the Cambridge Lover’s Knot Tiarafor thisportrait. Though Diana found it difficult to part with a
favorite, the dress was auctioned for charity with othersfrom her collection at Christie's in 1997. It sold for $90,500.

Terence Donovanphotographed everyone from PrincessDiana to Sean Connery and models such as NaomiCampbell. One of his great talents was he could talk
anybody into doing anything.There’s the famous story of Princess Diana. She wasnervous and he said, ‘Don’t be nervous,’ and he took a £20note out of his wallet, waved it in the air and said, ‘Smile at
mother-in-law. She did. He got the picture. He’d get many more.

-Aworld’s firstfeaturing the world’slargest coins of 1,5 kilo pure silver!
-Produced with a new superb qualityrimless printing technique!
-Delivered in an individually hand-craftedwooden frame by Joliijst in Amsterdam
and real museum glass!
-Officially licensed by the renownedphotographer Terence Donovan!
-Limited to only 60 pieces!