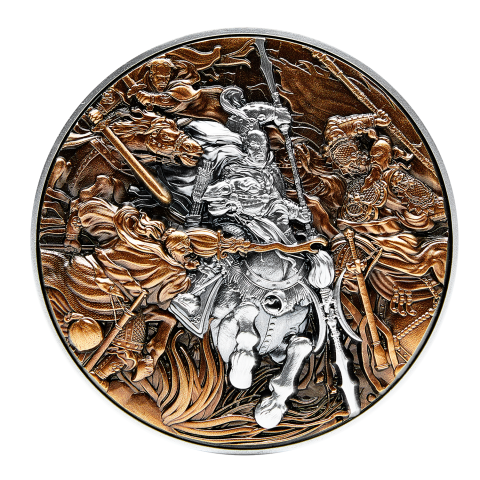 The battle of Lü Bù against the Three Heroes - Liú Bèi, Guān Yǔ and Zhāng Fēi, took place at the Hu Lao Pass or ‘Tiger Gate’, a military vantage point that was highly sought after. Well aware of his excellent capabilities in battle, the Three Heroes came together in an attempt to defeat Lü Bù and his Red Hare. In this piece, all four heroes are suited in their full-battle armour wielding their signature and trusted weapons in hand. From the textures of the horses’ manes to the facial expressions of each of the warriors, every detail is pronounced deeply in an ultra-high relief.

On the obverse sits the stamp of the legendary Heirloom Seal of the Realm - an unparalleled sign of ultimate authority and power. The words ‘受命於天, 既壽永昌’, translating to "With the Mandate from Heaven, may the Emperor lead a long and prosperous life”, are inscribed in a magnificent shade of crimson red demanding authority and respect. First commissioned by Qin Shi Huang when he unified China and became her first emperor, the seal was carved from precious jade and used exclusively by the Emperor. It was passed down the ruling lineage and it symbolized a god-given power to rule, the seal was thus an object of rivalry and contention during the period of the Three Kingdoms, as feudal lords and warlords alike fought to possess it to demonstrate their positions as deserving leaders.

This impeccable piece is delivered in a two-tone finish to depict the scene impactfully. The form of Lü Bù and his steed is prominent in shining silver, while the Three Heroes approaching him are grounded in a rich antiqued gold tone. A new minting technique called “Bi-Metal Plus” was applied to give this piece an impressive size and weight. At 80mm in diameter, it is double the size of a regular 2 oz collectible, made possible by combining 11.5 oz of copper embodied within two layers of 999 fine-silver totaling 2 oz, to deliver a super ultra-high relief topped with silver antiqued finishing.